Did you know that photography was an early open science project?

On 19 August 1839, the French government made the secret of making daguerrotypes “free to the world” as a gift. Daguerrotypes are specially-treated metal plates that can store an image it’s exposed to. Treating the plates with developing chemicals reveals the picture. 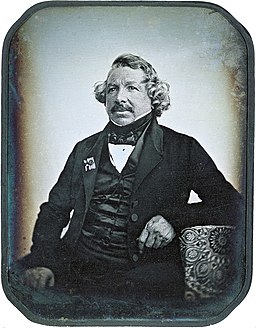 Their name comes from their inventor, Monsieur Louis Daguerre. In the early daguerrotype days, you’d need to say cheese for around 10 minutes to give enough time for the image to burn onto the plates so it could be developed, perhaps why Louis looks a little bemused in his picture. However, the French government giving up the secret of making the photographic plates to the world (except the UK for complicated patent reasons) meant that lots of people could work on the problem, and the process was rapidly refined.

Louis initally tried to raise money for his invention via subscription, similar to today’s VC funding models. Instead, the French government offered him a modest pension in exchange for giving away the rights.

The chemicals used in daguerrotypes meant that the subsequent images were fragile. You had to store them under glass or in special cases because they degraded in the light. So Louis not only an early photographer, but effectively the first snapchatter. The image evaoporation also means that daguerrotypes are now rare and therefore expensive.

And thanks to open science, artists today are still making daguerrotypes, although you have missed out on buying a modern (c 2005) daguerrrotype of a skull for $10,000 from Sotheby’s.